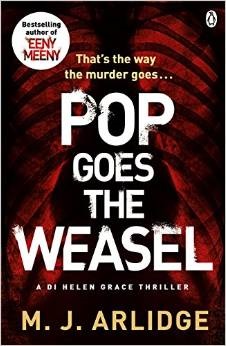 This is the second book in the new DI Helen Grace series which started with the publication of Eeny Meeny in May 2014 and which was talked about ALL over the bookternet, so of course I had to read that one first. I was completely hooked and ended up reading both books in three days. Huge thanks to the publisher for providing me with a copy of this in exchange for an honest review.

NB: This second book gives away a lot of the plot of the first one, so DO read them in order if you haven’t read either yet… I’ve not included any spoilers in my review, just in case.

A man’s body is found in an empty house. His heart has been cut out and delivered to his wife and children.

He is the first victim, and Detective Inspector Helen Grace knows he will not be the last. But why would a happily married man be this far from home in the dead of night?

The media call it Jack the Ripper in reverse: a serial killer preying on family men who lead hidden double lives.

Helen can sense the fury behind the murders. But what she cannot possibly predict is how volatile this killer is – or what is waiting for her at the end of the chase…

Eeny Meeny explored a truly horrific idea: two people are kidnapped and kept in complete isolation. Only one can be released by using the gun provided on the other. Pop Goes the Weasel is set a few months later whilst the characters are still dealing with the aftermath: ‘There had been many who’d called for her to be stripped of her badge. For acting alone… for deliberately misleading fellow officers…’

This story is slightly less horrific and violent than Eeny Meeny but still gory in the extreme: ‘The top lolled lazily backwards, revealing the legend “Evill” written in dark crimson on the underside. It was the perfect introduction to the box’s awful contents. Lying within, in a nest of dirty newspaper, was a human heart’.

Both books are extremely fast paced – there is no getting bored here! They absolutely race along with any number of twists and turns along the way. Based in Southampton, this story is intricately plotted and Arlidge begins to further develop the character of Helen Grace for us. This is no one dimensional fictional detective; Helen Grace is a seriously complex character. Whether she is entirely likeable is questionable, but that doesn’t seem to matter in the least.

We meet many of the same characters from the first novel and get to know them just a little bit more –Tony and Charlie are just great. Each character has their own backstory – that of the killer being no exception. One victim’s wife particularly got under my skin – she irritated the hell out of me, in a completely good way! ‘Because he’s my husband. The head of the family. I am his helpmeet and I support him in any way I can, but it’s his duty to correct us when we require it’. I mean. AAAGGGGHHHH!

The chapters are short and hard-hitting. In theory this means you can easily dip in and out of the novel. In reality, it just makes it harder to put it down! I was convinced I knew what was coming on more than one occasion and was (as in the first novel), reassuringly wrong in every case. Arlidge poses some serious questions about the nature of good versus evil here, and the story stayed with me long after I’d finished the book. I’m only grateful that he is proving to be a hugely prolific author – the third in the series is due out next month, and the fourth in September; I can’t wait to read more.

Eeny Meeny is available on kindle for only £3.49: Eeny Meeny: DI Helen Grace 1

5 thoughts on “Pop Goes the Weasel by M. J Arlidge”