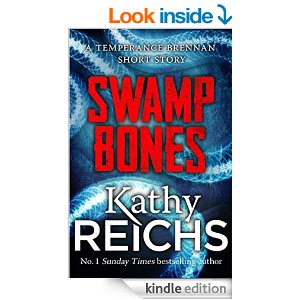 I have absolutely adored the Dr Temperance Brennan’s stories since the publication of the first novel – Deja Dead, all the way back in 1997 (is it really 17 years ago??) so of course I jumped at the chance to read and review this short story.

For those that don’t know, Kathy Reichs is herself a Forensic anthropologist – one of less than 100 certified by the American Board of Anthropology. She is a Professor of Anthropology at the University of North Carolina and is on the Board of Directors of the American Academy of Forensic Sciences. She is also a mother of three. And STILL finds time to write. She is truly an inspiration.

Her character Dr Temperance Brennan (Tempe) is also a Forensic Anthropologist, and one who can’t help but occasionally overstep the line into the criminal investigations that stem from the remains that end up on her laboratory table. ‘As a forensic anthropologist, I am a specialist in the human skeleton. I study the bones of the visually unrecognizable’.

As any previous reader will know, Kathy Reichs never shy’s away from including incredible amounts of detail and this novella is no exception. The story may be short, but it contains a raft of scientific detail and description. This felt more concentrated than in the novels – no doubt because of the condensed length, and as a result, I wouldn’t necessarily recommend this as a good place to start for new Reichs readers’. Her fans however, will undoubtedly love it.

Forensic anthropologist Dr Temperance Brennan has just arrived in Florida’s Everglades for a much-needed break when she is unwittingly thrown into the middle of a deadly case with its roots in the darkest depths of the swamp.

So Tempe is supposed to be having a holiday but following a catch-up with a friend and colleague who specialises in bird pathology, she learns that the Everglades has a Burmese Python problem – oh my, what a problem to have! Her friend is studying bird remains ingested by the snakes and one thing leads to another… it turns out that the remains she is looking at are not all bird. Suffice it to say that Tempe is drawn unwittingly into a murder investigation.

As someone with an intense snake phobia some of the descriptions were challenging to read but I found myself sickly fascinated: ‘The prey is dead by the time it’s swallowed. A python strikes fast, then immobilizes the kill with its teeth…’ Thank goodness there are no pictures!

The story is fast paced and action packed. The research that went into this story must have been immense. The setting of the swamp just adds to the tension – you can feel the heat and humidity and smell the decay. There’s even a brush with a live alligator for goodness sake. What more could you want? As always, the ending is satisfying but leaves you wanting more Dr Brennan… I now fully intend to revisit the novels.

You can get the ebook on kindle for only £1.49 here: Swamp Bones: A Temperance Brennan Short Story

If you’d like to hear from Kathy Reichs herself, she was the guest on Radio 4’s World Book Club in October. Hear her here: http://www.bbc.co.uk/programmes/p027gcnh