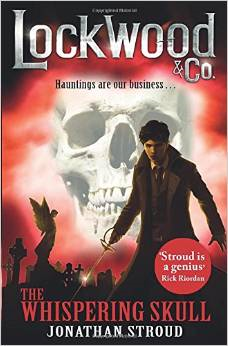 Have you ever walked into a bookstore and bought a book you’ve never heard of by an author you’ve never come across, purely on the strength of a recommendation from the staff? That’s how I came across the first Lockwood & Co. book (The Screaming Staircase) – and I am so glad I did. I LOVED it so was over the moon to be sent the second instalment to review.

Ghosts and ghouls beware! London’s smallest, shabbiest and most talented psychic detection agency is back.

Life is never exactly peaceful for Lockwood & Co. Lucy and George are trying to solve the mystery of the talking skull trapped in their ghost jar, while Lockwood is desperate for an exciting new case.

Things seem to be looking up when the team is called to Kensal Green Cemetery to investigate the grave of a sinister Victorian doctor. Strange apparitions have been seen there, and the site must be made safe. As usual, Lockwood is confident; as usual, everything goes wrong – a terrible phantom is unleashed, and a dangerous object is stolen from the coffin.

Lockwood & Co must recover the relic before its power is unleashed, but it’s a race against time. Their obnoxious rivals from the Fittes agency are also on the hunt. And if that’s not bad enough, the skull in the ghost-jar is stirring again.

Imagine a cross between a teenage, modern day London-based Ghostbusters (without the cheese) and Harry Potter and you’ll have a vague idea of just how great these books are. They are marketed as YA but are just as much fun for adults.

The three main characters – Lockwood, Lucy and George make up the Lockwood ‘Ghost busting’ Agency. They provide a familiar (in a Harry Potter-esque way) dynamic which is full of humour and completely works. I like them all, from the dashing, ‘never breaks a sweat’ Anthony Lockwood, to the completely kickass, gutsy Lucy Carlyle (who I suspect fancies Lockwood just a little) to the rather unattractive but studious, clever and ever curious George Cubbins. They all have their strengths – both psychic and otherwise. Lockwood’s strength is Sight – he can see ghostly disturbances and manifestations before the other two. Lucy’s ‘Talent’ is in detecting aural phenomena and George specialises in the research of cases; trawling through dusty old manuscripts, visiting old libraries and archives as well as doing a considerable amount of tea-making and baking.

In this world, only children and teenagers are sensitive enough to psychic phenomena to deal with ‘The Problem’ (the ‘ghostly epidemic that besets us’) and so are hired by agencies in order to find, and eradicate the source of their power. All of this is (supposedly) regulated by DEPRAC (Department of Psychical Research and Control), which is based at Scotland Yard and which I think of as the Lockwood version of a kind of Ministry of Magic.

This time around, the trouble involves a ‘whispering skull’ (in a jar, which communicates with scathing sarcasm and seriously winds up Lucy), lots of catacomb / churchyard / coffin based action, deadly artefacts that have been stolen and need to be found, lost manuscripts written in dead languages and of course, a fair smattering of pretty terrifying ghosts and spectres. There are rapiers, magnesium flares and salt bombs; spiders, rats and desiccated corpses. What’s not to like?

The story is creepy, fast paced and full of action – it absolutely gallops along with the action nicely interspersed with brief homely scenes usually involving copious amounts of tea, sandwiches and cake (baked by George of course).

Further intrigue (as well as lots of humour) is created by the presence of rival agency members – mainly those of the original, (in)famous Fittes Agency, ‘where psychic detection had been raised to an art-form’, particularly Quill Kipps (who we met in the first book). As Lucy tells us:

‘Being diplomatic, I’d say Kipps was a slightly built young man in his early twenties, with close-cut reddish hair and a narrow, freckled face. Being undiplomatic (but more precise), I’d say he’s a pint-sized, pug-nosed, carrot-topped inadequate with a chip the size of Big Ben on his weedy shoulder. A sneer on legs. A malevolent buffoon. He’s too old to be any good with ghosts, but that doesn’t stop him wearing the blingiest rapier you’ll ever see, weighed down to the pommel with cheap paste jewels. Anyway, where was I? Kipps. He loathes Lockwood & Co. big time’.

I loved it just as much as the first book. The ending is brilliantly satisfying and sets things up wonderfully for Lockwood #3…

The hardcover is out on 25th September: Lockwood & Co: The Whispering Skull: Book 2 (Lockwood & Co 2)

The paperback can be pre-ordered for April 2015 :Lockwood & Co: The Whispering Skull: Book 2

5 thoughts on “The Whispering Skull (Lockwood & Co. #2) by Jonathan Stroud”